​During World War 2, some 15,000 children passed through an infamous concentration camp in Czechoslovakia. But fewer than 1,500 survived. This week on The Land and the Book, you’ll meet one of the survivors. It’s a story you shouldn’t miss. Plus, Charlie Dyer and Jon Gauger will bring you up to date on the headlines throughout the Middle East—and explore your latest Bible questions. So join us for The Land and the Book.

Fill out my online form.

Dr. Charlie Dyer is professor-at-large of Bible at Moody Bible Institute in Chicago, Ill. Dyer is an Old Testament scholar as well as an authority on Middle Eastern history and religion. As a licensed guide to Israel, he has traveled extensively throughout the Middle East over the last two decades. Dyer has authored and co-edited many books and articles on the Middle East and the Old Testament. His articles have been published in Bibliotheca Sacra and Michigan Theological Journal. Dr. Dyer’s books include The Rise of Babylon, What’s Next?, The New Christian Traveler’s Guide to the Holy Land and Strike the Dragon.

Jon Gauger has been with Moody Radio nearly three decades and works with special projects. In addition to being the announcer for Moody Presents which features sermons by the Presidents of Moody, Jon is hosting and producing The Land and the Book. He writes and produces a weekly commentary, creates special documentaries, and has traveled to 30 countries covering stories for Moody Radio, or doing training work with international broadcasting partners. Jon is married to Diana, and they have two grown children-all of whom are Moody graduates. An avid photographer, videographer and reader, Jon also enjoys camping and freelance voice-over work, including audiobook projects. 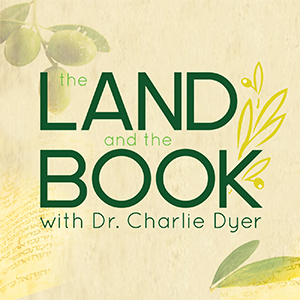 The Land and the Book

The Land and the Book helps listeners understand a biblical perspective on the Middle East’s complex tapestry of people and events. Join Charlie Dyer, Jon Gauger and Jim Coakley as they explore biblical, archaeological and prophetic events.
No Results Found